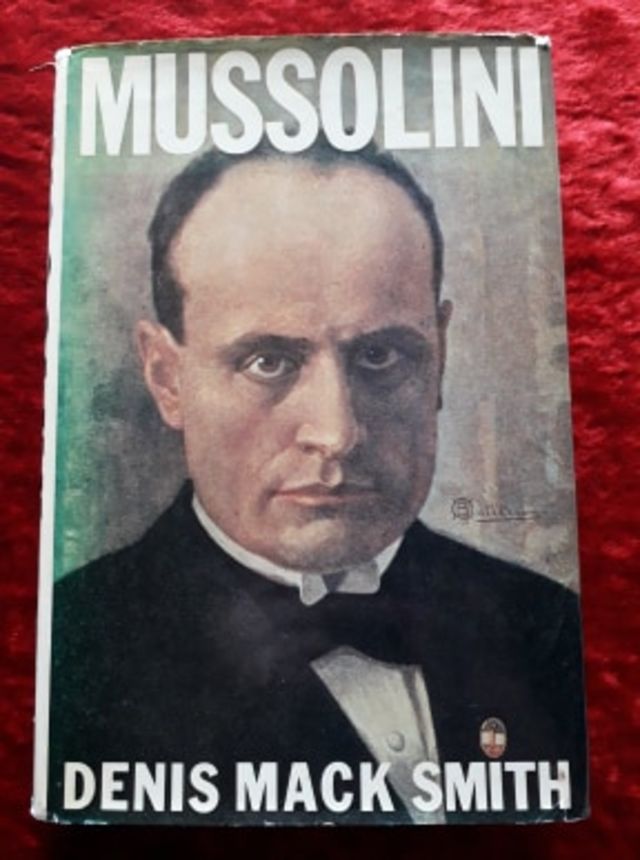 Hardcover with dustwrapper, nicked edges of wrapper, inside foxing on wrapper

Benito Mussolini was the first fascist: before Hitler's stormtroopers came on the scene, II Duce's black shirts were parading around the streets of Rome. Mack Smith (Italy: A Modern History; Mussolini's Roman Empire) portrays Mussolini in familiar enough terms: prone to violence all his life (he was expelled from school for stabbing classmates and even stabbed a girl friend); purveyor of constantly shifting, cumulatively incoherent theories; master of rhetoric; creator of a self-image of strength; etc. Mack Smith picks up Mussolini's story at birth; follows him through his youth as the son of an often-unemployed anarcho-socialist father and school-teacher mother; moves on to his career as a newspaper editor (the socialist Avanti) and founder of the fascist movement--first, through his paper Popolo d'Italia; then, after 1922, as head of the Italian government. He graphically explains how Mussolini exploited the crisis in Italian politics at the end of World War I--the myth of the hollow victory, based on Italy's shortchanging at Versailles--and curried favor with wealthy industrialists who bank-rolled him so that fascist bands, some of whom were really out of Mussolini's control, would assault trade unionists and socialist activists. Once in power, Mussolini relied on the threat of physical force to keep the liberals and hesitant conservatives in line, and made his point stick by engineering the murder of a leading opposition leader (the Matteotti affair). There was no hidden rationality behind these moves, since ""Italian fascism originated not as doctrine but as method, as a technique for winning power."" So, the irreligious Mussolini made a compact with the Catholic Church--to consolidate his power; if that meant the reversing of a policy of increasing jobs for women, so be it. The Church liked the fascists' position on birth control--Mussolini wanted to increase the population--and their suppression of freemasons and socialists; and Mussolini needed the Church's aura of legitimacy for foreign affairs. The WW II debacle is laid by Mack Smith at Mussolini's feet for pushing an obviously unprepared and unenthusiastic country into war to satisfy his own desire for greatness and feelings of inferiority vis-Ã -vis Hitler. When partisans killed Mussolini at the end of the war, it ended a period of one-man-rule with all the vagaries that go with it. The problem with Mack Smith's account is that Mussolini is so resolutely portrayed as a man out for himself that it is hard to perceive why anyone stayed with him; in this telling, fear is the only explanation for his rule--and that simply is not enough. Mack Smith's hesitancy to go into more speculative aspects aside, this is a neat, well-documented study of a tyrant--the best for a general audience around. (Kirkus Review)