The Templar Nation By Freddy Silva 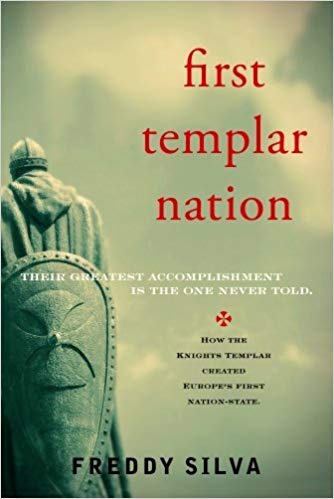 One has two burgeoning shelves of history books in one's personal library dedicated to the Knights Templar, most of them written by Englishmen based on translated French and English historical archives and most of them all very similar to each other. Prior to the arrival of this book onto the scene the most enlightening offering had been Andrew Sinclair's book 'The Temple Scroll' which surprised one with the background of Bernard of Clairvaux's entry into the Cistercian order/activities/life in the decades before the emergence of the Templar order.

One has been eagerly awaiting a book in the English language based on either the Portugese or Spanish historical archives to complete the account of this curious brotherhood that seemingly emerged from nowhere to 'guard' pilgrims on the route to Jerusalem. It is known that the Templars were especially active in Spain and Portugal, and to date this story had not been told in English, until now. And what an explosive work this book is, in the discovery of the story of the founding of the nation state of Portugal, Europe's first nation, the author Freddy Silva, a Portugese himself, has done a phenomenal job in bringing out into the open the obfuscated account of the brotherhoods beginnings, decades before their public emergence and, let's be honest here, their real raison de etre.

Until now this has been hidden from the light of day, in the archives of Portugal to be exact. Godefroi de Bouillon's actions particularly, upon entering Jerusalem are clarified against this backstory that Silva has uncovered. The subsequent modern grafting of the Priory of Sion onto the Templar activities/story now makes sense, and more especially, those curiosities of Rennes le Chateau/RoseLine/Rosslyn/Merovingian/New World and New Jerusalem and the actions of those major players such as Dee, Shakespeare, Bacon, the Royal Society and co, known to history in the eras of the Renaissance & Enlightenment make further sense when draped against the backdrop of the activities in Palestine and the knowledge that this band of brothers brought back from the dust of the ancient world. Very well done Mr Silva, extremely well done. One of those books one has to read several times in order to absorb everything it has to offer. A masterpiece. Well done Mr Silva, well done indeed.