The Hollow Earth - the greatest discovery in history 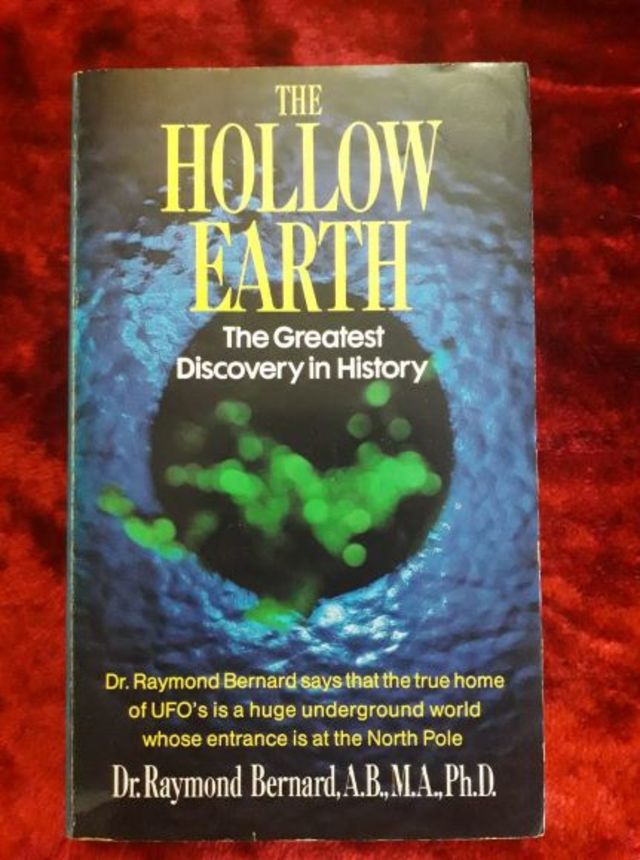 Dr. Raymond Bernard was a pseudonym, and his bizarre book was a 60s classic of weird UFO literature.

Said the original back cover copy for the book: Revealed! The Underground World of Supermen Discovered Under the North Pole! Can you explain the following? Why does one find tropical seeds, plants and trees floating in the fresh water of icebergs? Why do millions of tropical birds and animals go farther north in the wintertime? If it is not hollow and warm inside the Earth at the Poles, then why does coloured pollen colour the Earth for thousands of miles? Why is it warmer at the Poles than 600 to 1000 miles away from them? Why does the north wind in the Arctic get warmer as one sails north beyond 70° latitude?

On top of all of, Admiral Byrd supposed made several journeys inside the earth by travelling through the holes in the poles. Could there be anything to Bernard s bizarre claims?

Chapters include: UFOs and Governmental Secrecy; Admiral Byrd’s Epoch-Making Discovery; The Hollow Earth; William Reed’s Book, Phantom of the Poles ; Marshall B. Gardner’s Book, A Journey to the Earth s Interior ; Was the North Pole Really Discovered?; The Origin of the Eskimos; The Subterranean Origin of the Flying Saucers; Description of a Theoretical Aerial Expedition into the Polar Opening Leading to the Hollow Interior of the Earth; Agharta, The Subterranean World; Flying Saucers, Propulsion and Relativity.

1; There is a large population inhabiting the inner concave surface of the Earth, composing a civilization far in advance of our own in its scientific achievements, which probably descended from the sunken continents of Leuria and Atlantis. Flying saucers are only one of their many achievements. It would be to our advantage to contact these Elder Brothers of the human race, learn from them and received their advice and aid.

2; The existence of a polar opening and land beyond the Poles is probably known to the US Navy in whose employ Admiral Byrd made his two historic flights and which is probably a top international secret.