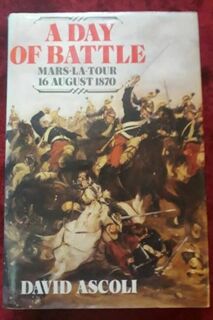 France's defeat in the Franco-Prussian War of 1870-71 was the beginning of decades of crisis for the French Army and the French nation. Despite the incompetence of the French commanders, there was a brief moment when the French could have turned defeat to victory, near the small town of Mars-la-Tour on August 16, 1870. This classic work is one of the few books currently available in English.

The battle of Mars-la-Tour was to change the face of Europe. Two weeks later at Sedan, Emperor Louis Napoleon Bonaparte surrendered his Army of Chalons to King William of Prussia, and on 28 October Marshal Bazaine capitulated the Army of Rhine to Prince Frederick Charles in Metz. On 18 january, 1871, King William was elected the first Emperor of a united Germany. And who shall say what sombre results were to flow for future generations from that watershed of history?

‘A Day of Battle’ is an important, unusual, and immensely readable contribution to the history of our times.