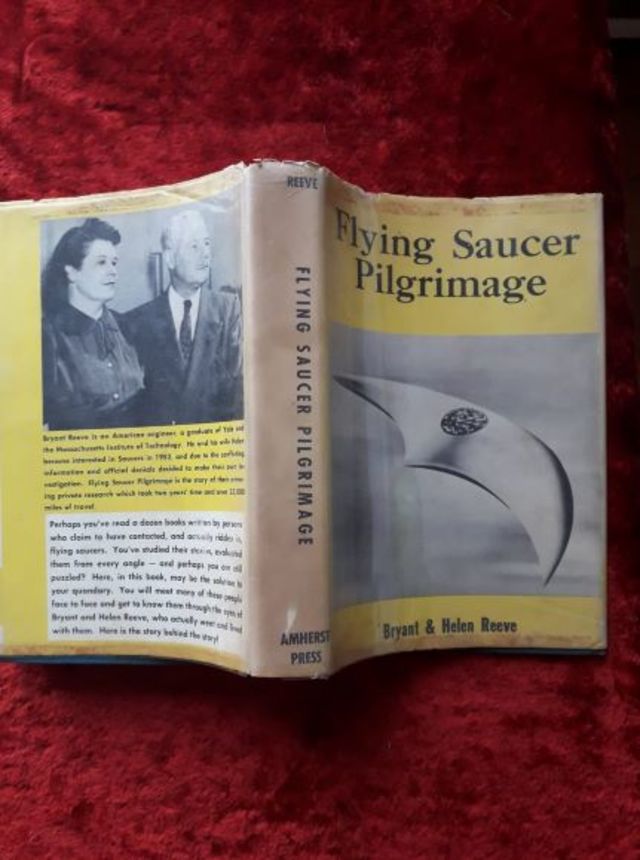 By Helen and Bryant Reeve

The insistence of individuals on the truth of the flying saucer phenomena on the one hand and official denial on the other has confused many of us. Whom are we to believe, and how are we to judge? The authors of this book decided that only way to find out was to make their own investigation. Thus they set out on a 23,000 mile pilgrimage to visit, talk to, and live with those individuals who claimed saucer experiences. They spent two years in their self-appointed task.

The fist year they invited prominent saucer contactees, such as George Adamski, George Hunt Williamson, Truman Bethurum and Desmond Leslie, to come to Detroit and tell them all about it. They hired lecture halls and as many as 4,700 people attended. They were fascinated.

In 1954 Bryant Reeve retired and he and his wife drove to Mexico. Here they found saucer interest high, and with far less unofficial censorship. They helped uncover a Mexican chauffeur who had contacted a saucer near Valles, Mexico, and had conversed most of one night with two men from outer space.

They began a round of visiting everyone they could think of who had seen a flying saucer, contacted one by any means whatever from radio to mental telepathy, or who had a theory on flying saucers. They decided that by such visits, by actually living with these people, they would come to know them, and by this type of study be better able to evaluate the truth or untruth of their stories.

They sought out Daniel Fry, the rocket technician who said he rode a flying saucer for 4,000 miles. They contacted Meade Layne, director of Borderland Sciences research Associates, one of the greatest living researchers into the supra-physical aspects of flying saucers. They went to Mark Probert, famous trance medium. They made every effort to evaluate the varied phases of saucer phenomena.