Giai Phong ! The fall and liberation of Saigon 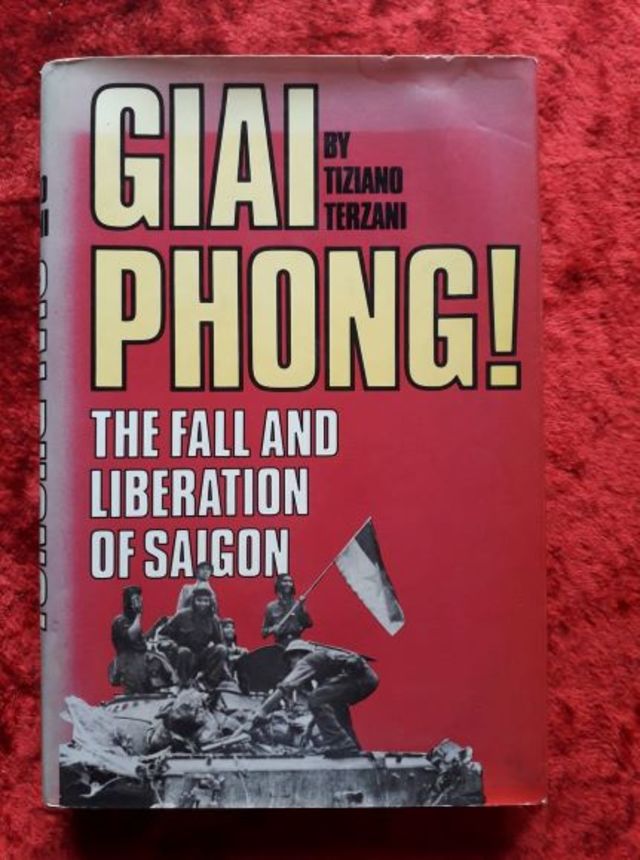 Tiziano Terzani slipped back into Saigon on April 27th, 1975, determined to witness the end of Vietnam’s most tragic war. What he experienced over the next ninety days – last ditch attempts at negotiation, the panicked American evacuation, the precipitous conquest of Saigon, the anxious waiting for a bloodbath that never came, the first signs of transformation and reconstruction – is the subject of this book, a first-hand account of the revolutionary process in Vietnam during and after the collapse of American power.

Terzani, whose reports on the takeover at Doc Lap palace ion April 30th, 1975, were the first news bulletins out of the new Vietnam, brings an informed passion to this exclusive and timely story, he gives dramatic revelations about the last days of American presence – how the American blocked negotiations to gain time for their own evacuation, the story behind the abortive baby lift, the unmasking of agents on both sides. He offers an incisive picture of Saigon waiting, Americans escaping, of Communist troops marching triumphantly into the city’s centre shouting ‘Giai Phong! Giai Phong! - Liberation! Liberation! He shows Saigon caught in the grip of its own fantasies, and the dream of revolution suddenly become daily reality; he describes the invisible new government and its mysterious new leaders, men like Tran Van Tra, Nguyen Huu Tho, Le Duc Tho; he analyzes the frightening ‘saintliness’ of many revolutionaries.

Terzani takes us to Con Saon Island, site of Thieu’s famous ;tiger cages’ to witness the ,iberation of thousands of political prisoners; to a ‘solidarity cell’ meeting in one of the districts of Saigon where old residents express resentment at the new regime; to Givral, gossip spot of the old Saigon, where the last of the ‘obstinate’ conjure up schemes of resistance; to the Delta for an inside look at revolution in the North Vietnamese capital on the road to reconstruction and reunification.

Terzani, a veteran Vietnam reporter and international scholar with close ties to the Vietnamese, taps usually hidden sources to present this report on a world at peace after thirty years.

Tiziano Terzani was an Italian journalist and writer, best known for his extensive knowledge of 20th century East Asia and for being one of the very few western reporters to witness both the fall of Saigon to the hands of the Vietcong and the fall of Phnom Pehn at the hands of the Khmer rouge in the mid-1970s.