Spy Catcher - the candid autobiography of a senori intelligence officer 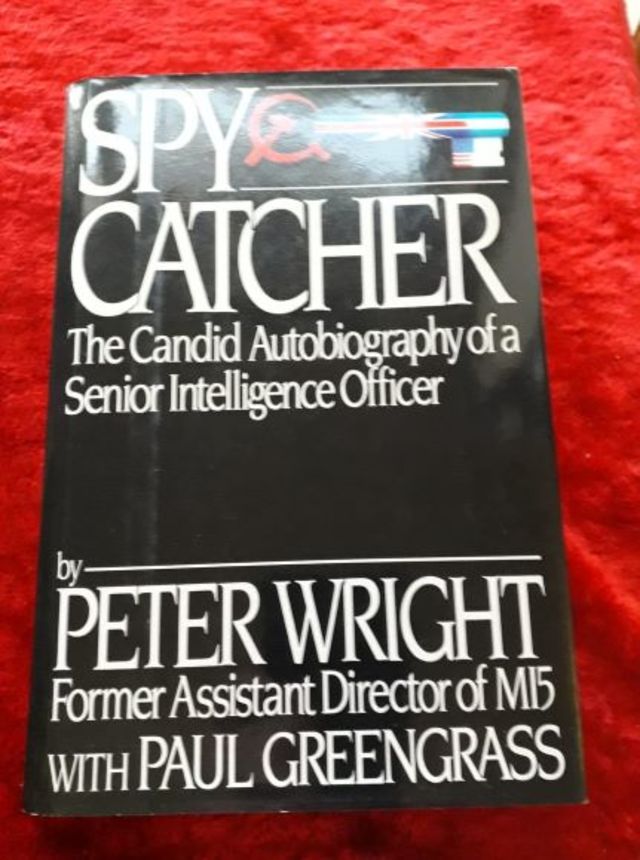 Spy Catcher – the candid autobiography of a senior intelligence officer

Motivated by patriotism rather than treachery, Wright devoted years of assiduous investigation to unearth the penetration of Britain by Soviet intelligence symbolised by Philby's success. Yet, while the ultimate conclusions of Wright's investigations proved so disastrously wrong, the history of his research, sensationally published in his book Spycatcher in 1987, unintentionally benefited British intelligence immeasurably. The intelligence services were so clearly out of control that, in recent years, procedures and controls have been introduced to stem repetition of Wright's vendetta, and gung-ho amateurs were invited to leave.

Recruited to MI5 in 1954 with the approval of Sir Dick White, MI5's director general, Wright was hailed as the service's first scientist in an era where MI5 was staffed by relics of the colonial service, survivors from the wartime radio interception agency and failed professionals. On his appointment, White allegedly said to Wright, ``I'm not sure we need an animal like you in the Security Service'', but their common bond was that both attended Bishop's Stortford School in Hertfordshire. Over the following 20 years, Wright's hunt for Britain's traitors was undertaken with White's blessing and protection, although the architect of Britain's modern intelligence services would become severely embarrassed by his protege.

Wright's scientific qualifications were limited. ``We thought he was a scientist because he could use a slide-rule,'' said one fellow MI5 officer with bitterness after Wright broke the Official Secrets Act and published his astonishing memoirs.

Working as a young man with his father at Marconi, the wireless manufacturer, Wright understood radio frequencies and microphones just when London, at the peak of the Cold War, had blossomed into a huge base for intelligence officers from the Soviet Union and its East European satellites. Unable to break Soviet codes and incapable of penetrating the army of enemy intelligence officers, British intelligence had seen its morale sink to an all-time low. The major cause was the escape to Moscow in 1951 of Guy Burgess and Donald Maclean, both senior Foreign Office officials, and Philby's ``resignation'' from MI6. That shattering discovery of Communist spies within the Establishment - all three from respected British families - had followed the exposure of Allan Nunn May, Klaus Fuchs and Bruno Pontecorvo as Soviet agents inside Britain's secret atomic research institutions.

Wright joined MI5 just as Dick White's manhunt for more British spies ground unsuccessfully to a halt. MI5's officers, dedicated but certainly not investigators, had uncovered evidence of huge Soviet recruitment of Britons at Oxbridge in the 1930s and penetration of Britain's trade unions, the Labour Party and the universities, but had failed to extract any confessions, let alone launch one prosecution among the dozens of suspects. The most notable escapee was Anthony Blunt, formerly of MI5, who had become a highly respected art expert and the Surveyor of the Queen's Pictures.

According to Wright's substantiated account, he exposed how MI5 suffered other weaknesses. Using his specially adapted radio equipment, he demonstrated to his superiors that the Soviet intelligence services in London were actually monitoring all of MI5's own communications, especially those of the ``watchers'', that band of plodders on foot and in cars tasked discreetly to follow suspected KGB intelligence officers in the hope of spotting an encounter with a traitor.

Under Wright's direction, MI5 changed its frequencies and the Soviets were suddenly operating ``blind''. Wright's reputation grew. He successfully bugged the Egyptian embassy's cypher room before the Suez crisis and then introduced his expertise and new equipment to the CIA. Condemned as unreliable because of past spy scandals, British intelligence redeemed is value as a trusted partner.

In 1960, Wright's expertise was again used to plant bugs and listen to the activities of a suspected Canadian businessman in London. The result of a brilliant surveillance operation was the arrest and conviction in 1961 of Gordon Lonsdale, a KGB illegal, followed by other arrests. While Roger Hollis, the new director general of MI5, praised all concerned, Wright became mesmerised that Lonsdale's imminent arrest was known in advance by the KGB and that Lonsdale had been sacrificed to protect a more important Soviet spy in Britain. His alleged evidence was the pattern of radio signals from the KGB station inside the Soviet embassy in London to Moscow: a frenzy of radio activity the night before the arrest and comparative silence the following day.

Wright's theory would have remained the grumble of an uneducated radio officer had he not met and fallen under the spell of James "Jesus" Angleton, the head of the CIA's counter-intelligence branch. The genial, brilliant Anglophile had himself become obsessed that the KGB had penetrated British intelligence. Even KGB defectors were believed by Angleton to be part of the Soviets' crafty disinformation campaign. Angleton's major source was Anatoli Golitsin, a KGB defector. Wright, and others in British intelligence, bought the Golitsin/ Angleton theories that the KGB's heavy penetration of Britain was due to unexposed Soviet agents not only in the institutions but, most of all, still within British intelligence. Enter "The Fifth Man" into British history.

In the wake of more spy scandals in London - Blake, Profumo and Vassall - came the final proof of Wright's fears. Philby's escape from Beirut in 1963 after Dick White had dispatched an interrogator to extract a confession convinced Wright that Philby had been tipped off by someone inside MI5. Most significantly, his theory was supported by White, by then the head of MI6. From that moment on, with White's support, Wright began a highly secret search through Britain's intelligence services, its institutions and Labour politicians to find the high-level moles introduced by the KGB to destabilise the country.

Wright's first suspect was Graham Mitchell, the deputy director of MI5. On Wright's insistence, Mitchell was followed and a camera installed in his office behind a two-way mirror. When the purely circumstantial evidence proved nothing, he switched his suspicion to Hollis, the director of MI5. Again the evidence was circumstantial, but in the hands of a zealot it became a gospel. The disaster was that no one inside British intelligence sought to curtail Wright's vendetta - mainly because many feared the existence of another traitor. Instead, Wright was made chairman in 1964 of a MI5/MI6 committee codenamed "Fluency" charged to find the traitor by reinvestigating the whole history of Soviet penetration of Britain.

Unleashed and uncontrolled, Wright's suspicions broadened. He became convinced that Soviet penetration extended to Labour politicians, especially Harold Wilson, the new prime minister. Again, there was no real evidence, merely conjecture. Wilson had bartered secret Rolls-Royce jet engines to the Soviets in 1949 and, after many ministerial visits to Moscow, traded with the Russians on losing office in 1951. After investigating Wilson's business associates, Wright found many to have "KGB connections".

So began the "Wilson Plot": break-ins, leaks, dirty tricks and false stories planted in newspapers to discredit the Labour government and prove that the Prime Minister was a Soviet agent. The most alarming was the account that the KGB had poisoned Hugh Gaitskell to allow Wilson's succession.

When Wright retired in 1976, Wilson, despite the plot of MI5, was back in power and nothing had been proven. Denied a full pension because of pernickety administrative rules, Wright emigrated in some poverty to raise horses in Tasmania, Australia. In festering anger, he secretly wrote an account of his career and suspicions, helped by stacks of documents he had taken without authority from MI5.

There he would have remained in obscurity if not summoned to London by his friend Victor (Lord) Rothschild. The scientist and intelligence expert feared that he was under suspicion as another Communist sympathiser and asked Wright to provide evidence of his innocence. During that visit, Wright was introduced to Chapman Pincher, a journalist with a succession of "spy scoops" to his credit.

Promised a part of the spoils by Pincher, Wright gave the journalist much of the material included in the book Their Trade is Treachery (1981) - the first expose of the British traitors, especially Hollis.

A new spy frenzy swept London. In 1984, Paul Greengrass and John Ware, both television journalists, visited Wright in Tasmania. After weeks of discussion and negotiation, Wright agreed openly to break the Official Secrets Act and give a television interview. His appearance and allegations fed the appetite for more. By 1986, Wright's memoirs had been completed by a ghost writer. Although his book Spycatcher was by no means the first by a former intelligence officer, it was well written and filled with unprecedented detail about British intelligence's activities: how MI5 "bugged and burgled" its way across London and the world.

Contrary to advice the Prime Minister, Margaret Thatcher, was determined that Wright should not profit by damaging the intelligence services and by breaching the Official Secrets Act. Since the publishers had astutely decided to launch the book first in America and Australia, the British government sought to convince an Australian court that Spycatcher should be banned. But by the time the hapless Robert Armstrong, the Cabinet Secretary, reached Sydney to give evidence, Wright's "candid autobiography" was a world-wide best-seller. Armstrong's admission that the Government had been "economical with the truth" when dealing with Pincher's original book, brought mockery upon the Government's case.

Famous and a multi- millionaire, Wright returned to his simple life on his farm, increasingly derided by those who investigated his claims. Yet his book remains the single most authoritative source about the secret workings of British intelligence, a reflection of the genuine and understandable fear of the nation's rulers in the midst of the Cold War. Their tragedy and mistake were to entrust the defence of the realm to a technician such as Peter Wright.